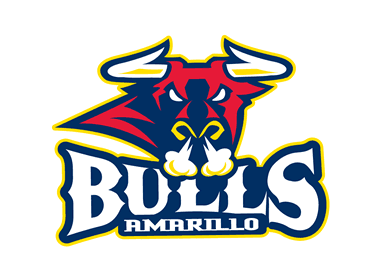 The 23 in 23 series features a look at all 23 teams in the NAHL for the 2017-18 season, with a new team being highlighted daily, leading all the way up until the start of the regular season.  23 in 23 looks into each NAHL team and will include video interviews with 23 coaches in the NAHL, as they provide fans with their expectations and outlook for the season, including taking a look at their strengths as a team and thoughts on the league.  It will also take a look back on last season and how each team fared and what they accomplished.
Amarillo Bulls
Head Coach: Rocky Russo (1st Year)
2016-17 record: 22-28-10, 54 pts. (6th in the South Division)
2016-17 leading scorer: George Mika (69 pts.)
2017 Playoffs: Did not qualify
2017-18 Division: South
First regular season game: Saturday, September 16th vs. Odessa Jackalopes
Home opener: Saturday, September 16th vs. Odessa Jackalopes
It was another tough season for the Amarillo Bulls in 2016-17. Despite having nine more wins than the season prior, the Bulls finished in 6th place in the South Division, 11 points and seven wins out of the final playoff spot.  The season had its bright points however, namely forward George Mika, who was named the NAHL Forward of the Year as the UMass recruit recorded 69 points and 30 goals, both ranking 2nd overall in the league.
Following the conclusion of the NAHL Draft, the Bulls announced that head coach Matt Nicholson was moving onto the NCAA to take a coaching position with Niagara University. Less than a week later, the Bulls found their new bench boss in former Assistant Coach Rocky Russo.
Russo was the Assistant Coach for the Bulls under then Head Coach Dennis Williams for three seasons amassing a record of 153-41-20, while winning two South Division Regular season titles, three division playoff titles and earning three consecutive trips to the Robertson Cup National Tournament. The Bulls culminated the three-year run by winning the 2013 NAHL Robertson Cup National Championship.
“Being named the head coach for the Amarillo Bulls is a huge opportunity for me and my family. With the ties that I have to the organization and the Amarillo community I thought it was the perfect fit. We are looking forward to do our best to getting Amarillo back to the level of prominence that is expected to our fans,” said Russo. “First and foremost, it is about coming in on Day 1 and creating the right culture with the right type of players. We have been working hard all summer to identify who that will be.”
Watch: Rocky Russo video interview
Russo said fans can expect a hockey team that mimics the lifestyle of the people of the Texas Panhandle. “Our team will be hard working with a lot of fast paced physical play,” he said. “We are going to do our best to create offense and score goals as well as entertain our fans as best as we can. I know how tough the South Division is to play in and the Robertson Cup Champion Lone Star Brahmas will pose a huge threat throughout the year as well as the rest of the teams in our division. We are going to go back to the style that won us that Robertson Cup. Our players need to be held accountable and play the game hard and with a style that our fans have become accustomed to.”
While the Bulls finished with nine NCAA commitments from last year’s team, Russo said that the development of players and placement into the NCAA remains a big priority under his watch. “There is no question that the NAHL has established itself as one of the best opportunities for players to get an NCAA opportunity and student-athlete. It is mission shared by all the coaches and I know of no other league in the world that does what the NAHL does. The players who move onto the NCAA are ready to play. Then they develop and succeed and move onto professional hockey. It all starts in the NAHL,” said Russo.
Russo identified some veteran players like forward Alex Truscott (60 games, 21 points) and defenseman Brendon Michaelian (56 games, 14 points) as those players who he expects to provide some veteran leadership and really make an impact on the 2017-18 Bulls. In addition, new faces like forward and Harvard commit Jon Russell and defenseman and Colorado College commit Anthony Firriolo are two players that Russo expects to be top-level NAHL players this season. “All these guys are going to be playing a lot of minutes and are the type of player that we need to produce in order to be successful,” said Russo.
The love for Russo and Bulls runs deep and is something he is passionate about the hungry for success. “I love the fans and community and I want to make sure I am doing everything in my power to ensure that we are going to be successful. The backbone of our success back when we won the Robertson Cup was the development of players and culture in the lockerroom. They accomplished a mission together because they bought into our system and that is something we want to bring back to Amarillo,” said Russo.